Progress Report: A Year of Regulation A+

which revamped the old Regulation A, became effective on June 19, 2015—just over a year ago. Here’s what we’ve seen in the past year:

Approximately 105 publicly-filed Regulation A+ filings to date, with approximately 44 of those filings qualified by the SEC. 16 of those offerings are actively selling today. On average, it took an issuer 109 days to qualify a Reg A+ offering from the date of filing. Note, however, that this number is not precise. Many issuers are filing confidentially, so the number of filings could be significantly higher. Additionally, some issuers filed their offerings prior to the June 19 effective date but qualified after the effective date, and then amended their offerings under the new rules. 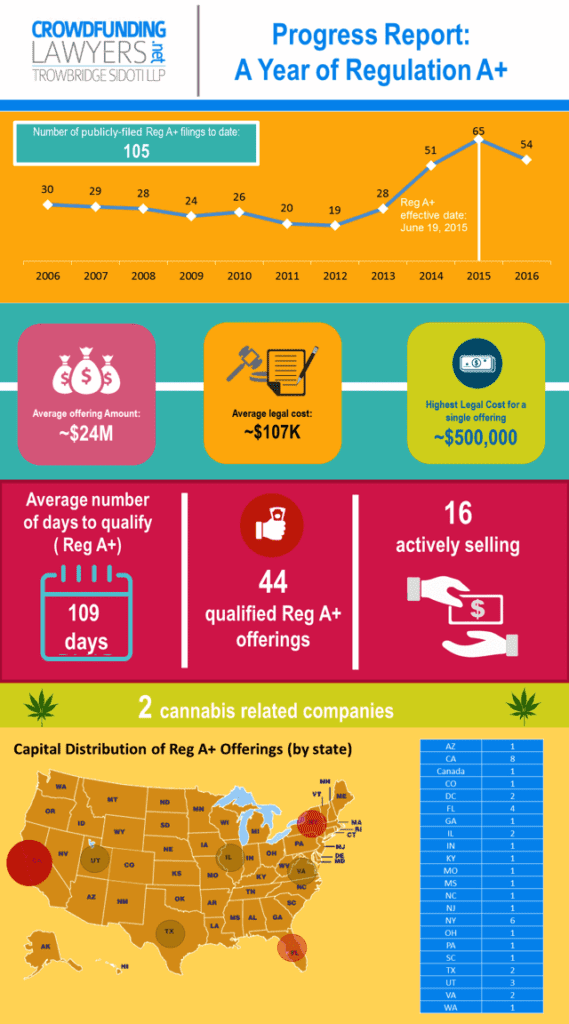 Legal fees averaged around $107,000 per filing, exclusive of blue skies and auditing fees. At least two issuers spent approximately $500,000 on legal fees—one with a large large law firm and another with a smaller law firm. For the most part, the legal fees are largely what one would expect, with national and Biglaw firms charging in the $150,000-300,000 range for representation, and smaller law firms generally charging less (although there are some notable exceptions).

The real estate industry has come out in full force to utilize Regulation A+, including Fundrise and American Homeowner Preservation. Industries lacking access to traditional financing are also turning to this regulation to raise capital—there are at least two cannabis-related companies with qualified offerings (Med-X and Weed Real Estate). Futuristic transportation companies have also found good success under Reg A+, including Elio Motors and XTI Aircraft.

Montana and Massachusetts had filed a lawsuit against the SEC over the scaling back of state regulatory authority and policy of Tier II offerings. On June 14, 2016, the DC Court of Appeals rejected their arguments, clearing away any remaining uncertainty or challenges to the new regulation.

On the legal side, the SEC seems to be doing a good job in qualifying Reg A+ offerings in a timely fashion. Attorney Jillian Sidoti, who has been filing Reg A offerings long before it became Reg A+, commented that “the SEC has been very responsive thus far. It seems like they're trying hard to get the process streamlined.” The average time to qualify thus far (109 days) is a dramatic improvement over the year (or two) long process under the old Reg A rules.

However, the Reg A+ industry still have significant hurdles to overcome. Anecdotally, some issuers have complained about the broker dealer process, saying that their third party broker dealer’s compliance team was unable to handle (and in some cases, unable to close) the sale of securities for their offering, despite significant investor interest and pending commitments.